CSO: Why emoting has never sounded as good as this 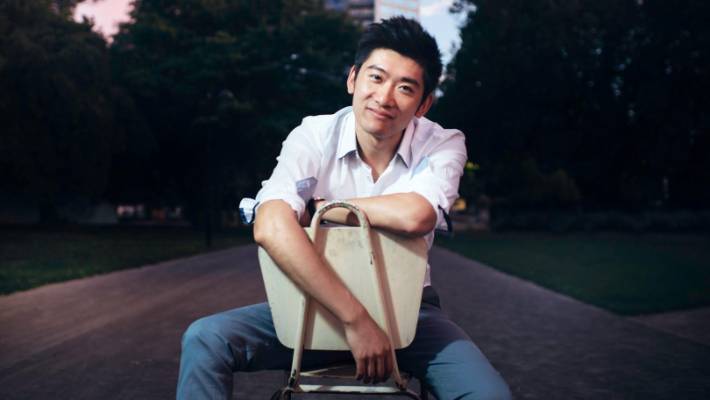 This was Tony Chen Lin's big night, but the lanky Chinese-New Zealander showed few signs of nerves as he walked on stage at Christchurch's Charles Luney Auditorium on Saturday.

This was a return home for Lin, who won the Christchurch Junior Concerto at the age of 14, before graduating from the University of Canterbury with string of accolades and moving to Europe to complete his classical music studies.

Now he was back to make his professional debut with the CSO. Greeting him was conductor Benjamin Northey, a full house and one of the most demanding piano concertos in the repertoire – Maurice Ravel's dazzling Piano Concerto in G major.

Unfazed, Lin conquered this seductive Gallic siren in a fastidious, yet full-blooded performance, marked by total control and diamond-hard precision. It was also a partnership made in musical heaven, as the CSO and Lin together tackled Ravel's slightly louche jazz inspired moods with exceptional clarity and control. Lin played the wistful slow movement with such sensual intensity that you could almost sense an audience holding its END_OF_DOCUMENT_TOKEN_TO_BE_REPLACED

Piano and Violin in Perfect Sync 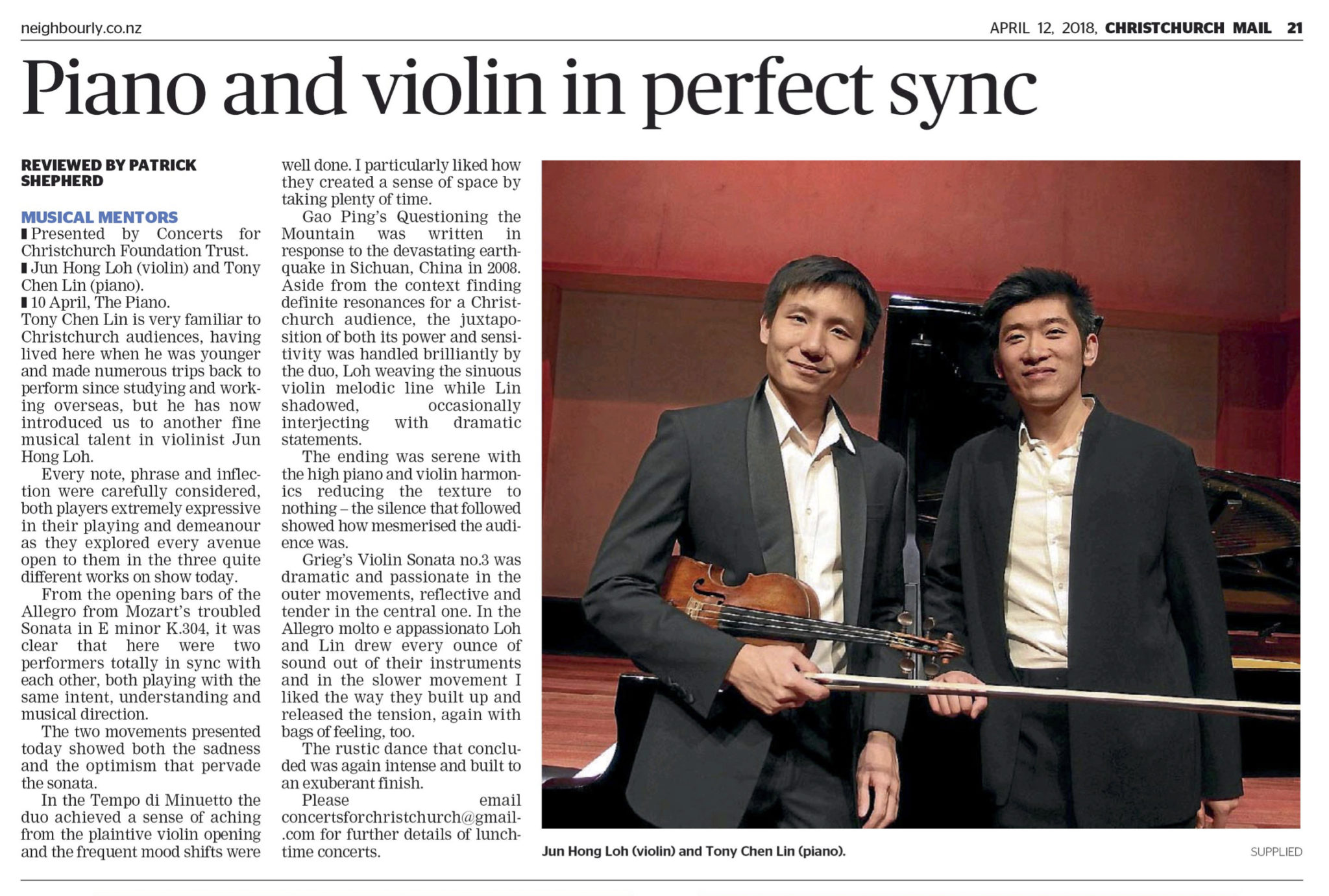 Tony Chen Lin is very familiar to Christchurch audiences, having lived here when he was younger and made numerous trips back to perform since studying and work­ing overseas, but he has now introduced us to another fine musical talent in violinist Jun Hong Loh.

Every note, phrase and inflec­tion were carefully considered, both players extremely expressive in their playing and demeanour as they explored every avenue open to them in the three quite different works on show today.

From the opening bars of the Allegro from Mozart's troubled Sonata in E minor K.304, it was clear that here were two performers totally in sync with each other, both playing with the same intent, understanding and musical direction.

The two movements presented today showed both the sadness and the optimism that pervade the sonata.

In the Tempo di Minuetto the duo achieved a sense of aching from the plaintive violin opening and the frequent mood shifts were well done. I particularly liked how they created a sense of space by taking plenty of time.

Both these exceptional young pianists are making names for themselves performing in Europe and studying with some of the best teachers. Their combined CVs are formidable and both Tony Chen Lin and Jun Bouterey-Ishido are pursuing careers that already feature awards and acclaim that promise so much. That the pair show dazzling technical confidence and ability is a given for all the works they performed but what was really exciting was the conceptualisation of the programme and the deep thinking behind it.

Playing four hands at the piano (piano duets, if you like) is not something that one hears often although, having said that, in recent years there have been a number of concerts where this genre has been explored. It takes a certain kind of connectivity between the performers, a degree of anticipation and musical thought that has to be totally in step otherwise it becomes merely an interesting exercise. Chen and Bouterey-Ishido had this, seemingly thinking as one and working together very convincingly.

For me this concert was always going to be about Stravinsky’s Le Sacre du Printemps, one END_OF_DOCUMENT_TOKEN_TO_BE_REPLACED

The standing ovation at the end of this recital was affirmation of some very special music-making and certainly, for me, one of my top two highlights from an intensive year of concert, opera and recital-going. As it happens, my other musical high point from 2017 was also a concert in the Christopher’s Classics series; that one featuring Diedre Irons and string principals from the NZSO.

Each of these concerts included a major, if less well-known, work by Schubert. The Piano Quartet from Irons and co proved an exciting and captivating encounter because of a truly exceptional and virtuosic performance and, while Tony Chen Lin and Jun Bouterey-Ishido delivered similar excitement and virtuosity in other parts of their piano duet programme, their interpretation of Schubert’s Grand Duo Sonata was the one minor disappointment of the evening. It may not be one of Schubert’s finest pieces, but, played with less romantic indulgence than we heard last night, it can survive its more-than-forty-minute duration more effectively. Lovingly played as this sonata was, perhaps Schubert’s greatest piano duet masterpiece, END_OF_DOCUMENT_TOKEN_TO_BE_REPLACED

Slotting in this extra concert in his home town after a New Zealand-wide tour, Tony Lin gave a performance that was assured, thoughtful and full of musical interest. Unafraid to tackle meaty major works from memory (the only piece that wasn’t was, paradoxically, one of his own compositions), Lin approached his performance with a reverence and focus, projecting a Zen-like intense calm harking back to many of the great exponents of the instrument. When the sparks fly they did so with great power and weight but Lin’s gestures were never facile and one felt throughout that everything fed into a deep understanding of the music.

Bartok’s Piano Sonata opened the programme and in many ways laid out the palette for what was to come. Lin brought out the improvisatory nature of the Allegro moderato, a fine contrast to the rhythmic bite of the typically folk-inspired ideas that drove much of the rest of the piece. No mean feat but Lin managed to draw together the slightly schizophrenic threads into a coherent whole, which was also a feature of the Schubert’s massive Piano Sonata no.21 in B flat major concluding the END_OF_DOCUMENT_TOKEN_TO_BE_REPLACED

This country has produced a wealth of young and gifted music performers, and in his ‘Song and Dance’ programme the pianist Tony Chen Lin showed by his technical mastery and penetrating interpretations that he is among the forefront of these.

His quality came out right at the start when he found meaning in the intricate harmonies of Bartok’s ‘Improvisations on Hungarian Peasant Songs’, where the composer took folk music from his native land and developed them in imaginative ways. The pianist’s control of rhythm and elegance were completely worthy for Bach’s ‘French Suite No.5’, seven movements based on dance styles of the time. ‘Distant Voices’ by the contemporary Chinese composer Gao Ping was a fascinating work, exotic and intricate, and its appealing tonal colours and textures made it a delight.

Tony Chen Lin’s own short ‘Digression’ could well have been called ‘Introspection’, for it seemed to reveal a composer’s inner thoughts while exploring the range of sounds which a piano can make. Schubert’s Piano Sonata in B flat major was written at the end of the composer’s life and expresses his END_OF_DOCUMENT_TOKEN_TO_BE_REPLACED 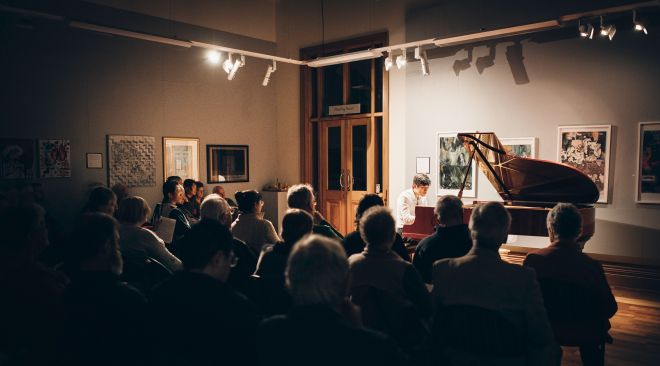 When polished talent, consummate musicianship, and passionate dedication converge in a single performance, the result is likely to be electrical. So it was with Tony Chen Lin’s presentation of works by Bach, Beethoven, Bartok, and Schumann, incorporating a composition of his own. Performing from memory, his concentration was solely on the keyboard, and the intensity was palpable.
The delivery of Bartok’s solitary Piano Sonata (Sz. 80), one of the most important works for solo piano of the early 20th century, was everything that it should be, taking us through a kaleidoscope of changing moods and musical ideas. Lin’s skill was outstanding, with every note crafted in the mind before being transferred to the keyboard. Roles were reversed. His hands became the instrument, and the piano the medium.

After receiving applause, another work of major significance to the piano repertoire – the Bach Prelude and Fugue in E Major BWV 878, again with amazing forethought and preparation. The voicing of the three parts in the prelude held such clarity that one was tempted to hum along with one or any of them, and working through six episodes, END_OF_DOCUMENT_TOKEN_TO_BE_REPLACED 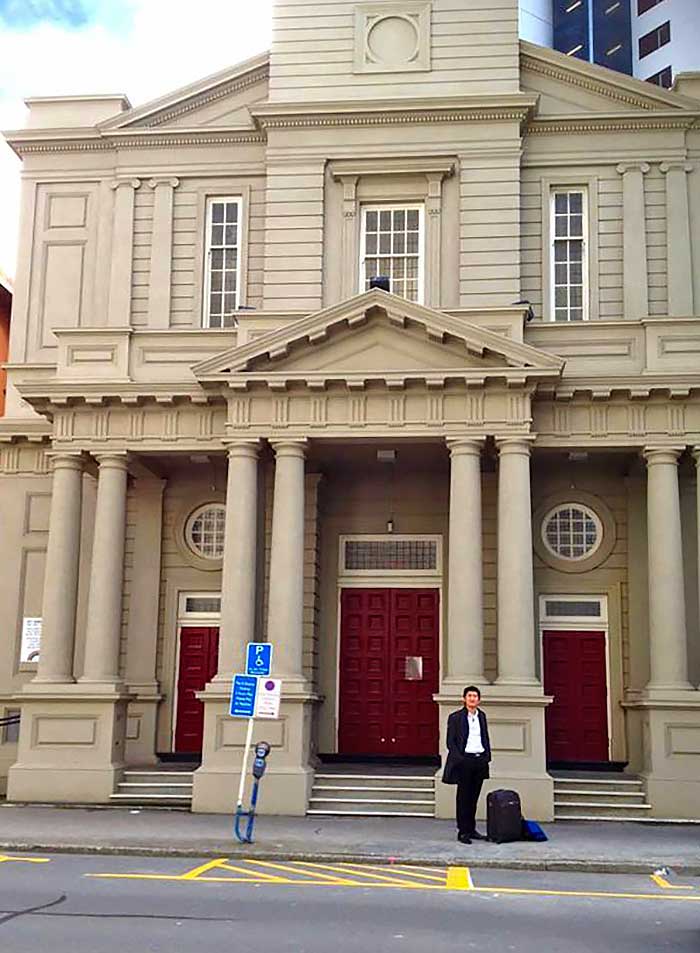 Tony Chen Lin was one of two supremely gifted young Christchurch-based pianists (the other was Jun Bouterey-Ishido) who “slugged it out” for first prize at the 2008 Kerikeri International Piano Competition, an event which I had the good fortune to attend. The adjudicator, Australian pianist Ian Munro, awarded Jun Bouterey-Ishido the first prize by what he acknowledged was the narrowest of margins, a decision I was glad I didn’t have to make, as I remember not being able to fault either of them, performance-wise, at the time. Both have gone on to significantly further their pianistic and musical careers, this afternoon’s recitalist Tony Lin completing his Master of Music at the Hochschule für Music in Freiburg in 2013, as well as recently performing as both pianist and conductor in Germany (Freiburg and Stuttgart) and in Switzerland (at the Semaine Internationale de Piano et de Musique de Chambre), at which he’s appearing this year once again, as a conductor.

I thought Lin’s recital programme fascinating – the choices suggested that the pianist enjoyed making connections and drawing attention to influences and cross-references. Both the Bartok and the Gao Ping works END_OF_DOCUMENT_TOKEN_TO_BE_REPLACED