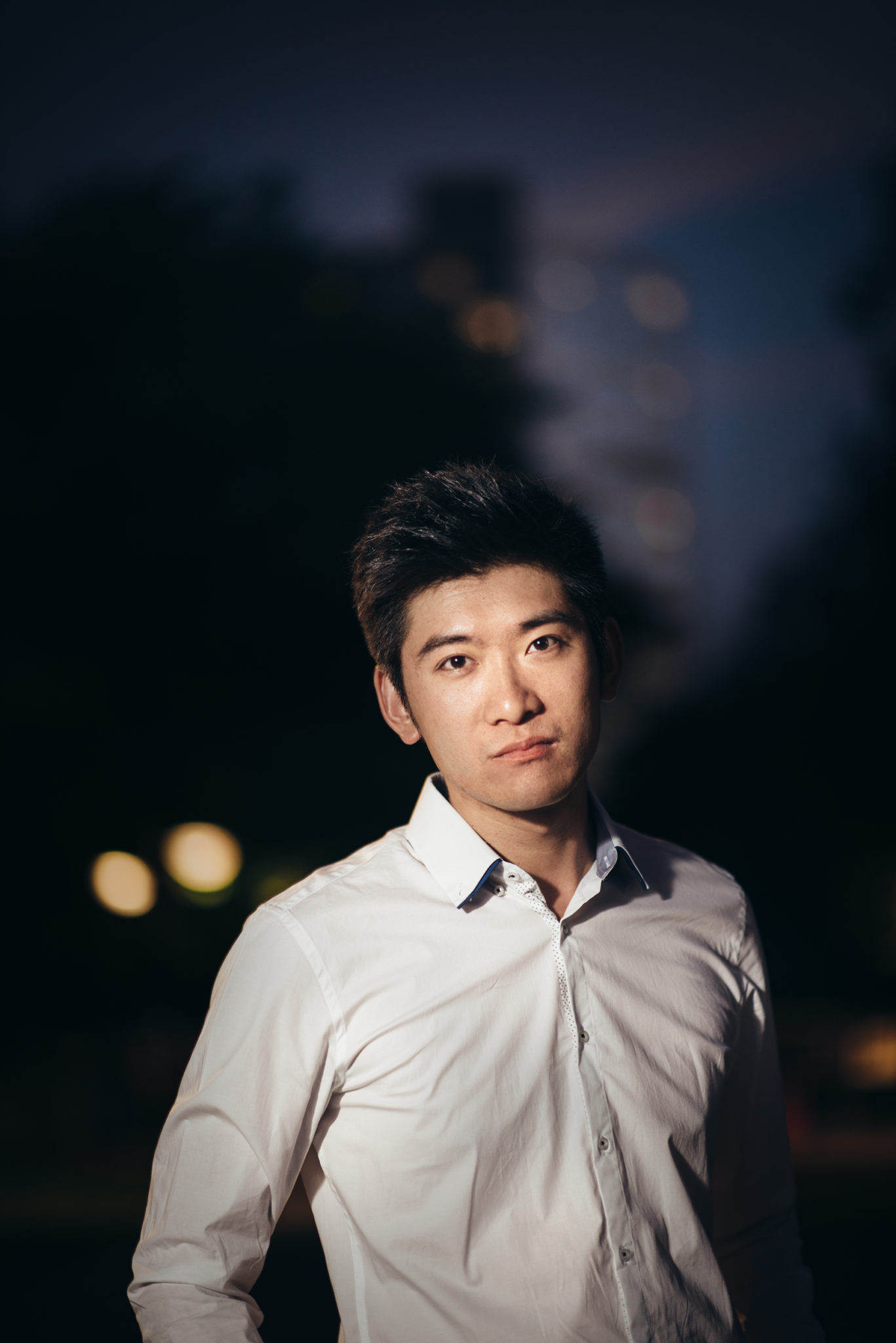 Can it really be three years almost to the day that Tony Chen Lin was last playing for us in this same venue? – delighting and enthralling us on that occasion with a programme remarkable as much for its explorations of the music’s connecting threads and echoings as its contrasts and differences? Perhaps it was the unifying factor of having a similarly “only connect” spirit hovering about the music and the playing on this more recent occasion which helped to “telescope” the intervening period so markedly.

Here, the pianist’s choice of repertoire sought out a thread of fantasy running through each of the pieces, an opening up of worlds of imagination and conjecture across varied mindscapes, ranging from personal angst (Mozart), romantic longing (Schumann), whimsical daydreaming (Gao Ping) and presentiment of tragedy (Janáček). Each of these particular states of mind was presented in vividly-focused tones and sharply-coloured hues by Lin throughout the recital, an approach which eminently suited both the Janáček and Gao Ping works, and, I thought, brilliantly illuminated from within certain aspects of the two Mozart pieces bracketed together by the composer. I did, however, find the pianist’s approach to parts of the Schumann work something of a challenge, for reasons I’ll come to in due course.

Straightaway, with the opening of the great C Minor Fantasie K.475 (written six months after the K.457 Sonata but published together, and which immediately followed the former on this afternoon’s programme), we felt the music’s incredible weight of intensity in Lin’s playing, each note seemingly “reimagined” in our presence, with “flow-like-oil” legato phrases punctuated by emphatic single notes and chords – very “orchestral” playing, of a kind that used the St.Andrews’ modern concert grand to its full, sonorous advantage. And how beautifully was the E-flat theme floated, here, with a legato that lived and breathed, and the line teased out with decoration, before giving way to an abrupt, full-blooded transition into agitation and conflict, a veritable roller-coaster ride of physical and pianistic expression! Mozart’s music was here imbued by Lin’s playing with a kind of Lisztian energy, its progress modulating alarmingly, turning about on its heels, uttering a self-questioning phrase or two, then again precipitously plunging into a vortex-like realm of ferment and unrest. An imposing, monumental return to the opening brought a few moments of uneasy calm, Lin’s concentration and focus keeping us on our seats’ edges right up to the piece’s final ascent – rather like a theatrical curtain suddenly thrown open to reveal the show about to start! – and we were then plunged, without ceremony, into the forthright world of the C Minor Sonata’s opening.

The rather more classically-proscribed lines, textures and overall structures of K.457 still got a vigorous workout under Tony Lin’s fingers  – my first reaction to the energy and dynamic freedom of the playing was to ascribe it all to a “Beethovenish” spirit (in whose direction some of Mozart’s music seemed headed in any case) – but Mozart himself was, like Beethoven, adamant as to where much of his compositional impulse originated, in his heartfelt tribute to the second of old JS Bach’s surviving sons,  Carl Phillippe Emanuel Bach – “He is the father; we are the children,” Mozart reputedly said, and the younger Bach’s restless vigour and dramatic innovation in his music certainly made its mark on the former’s oeuvre in places, not the least in in both of these works.

In the first movement. Lin’s tightly-wound whiplash responses to the music’s running lines made for volatile exchanges and startling modulatory swerves in both the development and recapitulation sections, before a coda gathered in the music’s dynamics to sotto-voce effect, almost Gothic in its eeriness. A beautiful singing line emerged from the opening of the Adagio cantabile, Lin’s playing underlining the music’s sense of consolation as a balance against the agitations of both outer movements – a warm-hearted precursor of Beethoven’s adagio theme from his “Pathetique” Sonata added to the listener’s sense of well-being, which the subsequent Molto allegro Finale disturbingly undermined, with its nervously distracted opening and almost percussive outburst which followed,  the music given the full, “play-for-keeps” treatment, to which it stood up remarkably well. Though not a performance for preconceptions of almost any kind, I thought Lin’s burning zeal and expressive focus carried the day for the composer, demonstrating the extent of the music’s capacities to profoundly disturb and convey a sense of tragedy.

Lin spoke about each of the items beforehand easily and personably, and in the case of Gao Ping’s music, with warmth and affection, the composer having been the pianist’s teacher at the University of Canterbury. Daydreams, a suite for piano (2019) was actually written for Lin, the music commissioned by Jack C Richards. Nowadays, Gao Ping lives and works in Beijing, the music tellingly mirroring that fact in places! – but the composer calls the music “dreams of everyone”. The pieces replicate a Chinese literary tradition of short story-like “sketches”, of ordinary, everyday things in people’s lives. The first, “Twilight”, generated a plethora of colours decorating a gently-insistent musical line,  both scintillating and spontaneously fusing together. Then “Songs without Words” , a piece which instantly reminded me of John Psathas’ iconic “Waiting for the Aeroplane” began with repeated atmospheric notes whose tones were joined by the pianist’s voice, long-held, haunting vocalisings, sounding like a “song after work”, everything delicately brushed in and at rest.

The following “Dance” (the first of two) quirkily came to life, its angular rhythms growing in insistence, before falling back and beginning again. Next, “Blues over a lost Phone” might well have been a present-day mirror-piece for Beethoven’s “Rage over a lost penny”, but with the player again breaking into song, a lament for his phone’s caprice and his own carelessness! – declamation, dialogue, displeasure and despair from the singer, and piquant irony from the piano part! A second “Dance”, wild and awkward, followed, the playing by turns poised and frenzied as the music required, interludes of calm building inexorably into cataclysmic upheavals of energy. The final “Wind Prayers” piece came as balm for the senses in different ways, the piece itself intended as a supplication to nature to bring relief to Beijing, a tragically air-polluted city. All the more poignant were the vocalisings of the pianist during this last piece, repeating the mantra “Come wind, come”, alternated with solemn piano chords and snatches of birdsong – so very moving.

No let-up of intensity was provided by the Janáček work which followed the interval – a piece made all the more remarkable by its genesis, first performance and subsequent “survival” history! Angered at the killing of a Moravian worker by Austrian troops at a demonstration in Brno in 1905, Janáček wrote a three-movement work with the titles “Presentiment”, “Death” and “Funeral march”, but the day before the concert the self-critical composer destroyed the manuscript of the work’s final movement, allowing only the first two movements to be played. He then afterwards took what was left and threw the score in the Vltava River.

What he didn’t know until 20 years later, was that the pianist, Ludmila Tučková, had secretly made a copy of the two remaining movements, and retained them until 1924, when she confessed to Janáček what she had done – he thereupon thought better of his hasty actions and allowed their publication! Such a poignant amalgam of tragic loss and triumphant recovery itself “colours” the remains of the work, expressing here in Lin’s hands the full impact of its componential weight.

We heard the composer’s characteristic blend of lyricism and strength at the work’s beginning, the pianist’s sharply-etched lines, forceful chordings and tightly-strung figurations recreating an inexorable flow of agitated, ever-burgeoning emotion towards its tragic inevitability – such battered, fatally “wounded” silences! Out of this came the second movement, at once still and declamatory, the utterances bewildered by shock and grief, turning to ritual-like means as a way of giving tongue to feelings. The lament gathered weight and agonised stridency, before falling away, the music repeating, trance-like, the same rising motif, a kind of unanswered question, which eventually drifted into nothingness – because the pianist had told us he wanted to dedicate his performance to the victims of the Christchurch mosque shootings earlier this year, the music was left to resonate in silence at the very end.

No amount of silence would have been sufficient for anything to follow in the wake of that music (perhaps we should have taken the Mahlerian step of going for a five-minute walk outside, clearing our emotional decks, and then come back, ready to plunge into the Schumann!)………still, there it was, the latter’s C Major Fantasie’s grand opening, a resounding single note at the head of floods of swirling figurations, suggesting exhilaration, excitement, agitation, turmoil, but with moments of telling lucidity, introspection, and ostensibly quixotic humour in between the great declamations of emotion!

This opening paragraph was handled by Lin with plenty of romantic sweep and ardour, everything carried along in great surging waves, the repeated descending motif very Florestan-like (Florestan was Schumann’s wild and impassioned alter-ego), though for me carrying the swashbuckling energies to a point of over-insistence in a couple of passages that might have had a lighter, more quixotic touch (the Im lebhaften Tempo section, for instance, where the left hand here obscured the right hand in places) – still, the Im Legendenton section was beautifully voiced, everything hushed, tender, and richly supported.

A lovely legato touch marked the end of the Im Tempo section, though once again the music’s playful aspect was, I felt, too readily pushed into frenetic mode; and even the more gently breathed cadences here had to quickly fill their lungs to say their piece just before the Esrtes Tempo returned. Again the recitative-like passages leading to a heartfelt Adagio section were beautifully done, as was the reprise to Im Tempo, but I wanted the Beethoven quote at the coda’s beginning (from his song-cycle An die fern Geliebte) to cast a kind of “spell” right from its entrance over the whole concluding episode – here I felt we were in need of Schumann’s other “alter-ego”, the poet and dreamer, Eusebius – the theme’s announcement on this occasion seemed simply too brusque, and not sufficiently “transformational” to be the something which the whole movement had been leading up to, though Lin then played its subsequent repetitions with more rapture and sensitivity.

Lin “strummed” the second movement’s chordal opening warm-heartedly into being, allowing the music at the outset a steady, dignified momentum, even if the following dotted-rhythmic gait of the music then seemed to want to push him along with ever-increasing insistence, narrowing the margins for any wry humour or variation. But then, the pianist won our hearts by unflinchingly fronting up to the piece’s “horror coda” with its attendant thrills and spills, and, amid the flailing notes, living to tell the tale!

Sanity was restored with the third movement’s opening, played here with the utmost sensitivity, allowing us to relish moments such as the beautiful nuancing of the melody as it ascended for the first time, and the gossamer delicacy of the cross-rhythms answering that opening ascent. Lin didn’t play my favourite sequence in the movement with quite enough “hurt” for me – the theme at Etwas bewegter and its modulating repetitions, with their heart-stopping, inwardly-resonating arpeggiated responses – but seemed to want to move all the more quickly to the passionate welling-up of emotion at the piece’s central climax, which he brought off splendidly, as he did  its recapitulation, right from the hushed beginning. And though I’ve heard the work’s coda performed with more lump-in-the-throat circumspection, this was a young man’s urgently-conceived and passionately wrought response to music which has, of course, no single way it must be performed, but allows for treasurable and necessary individual variation. Such was demonstrated here for us by Tony Chen Lin with undeniable conviction, and, as was reflected in a most heartfelt audience response, for our very great pleasure! Link