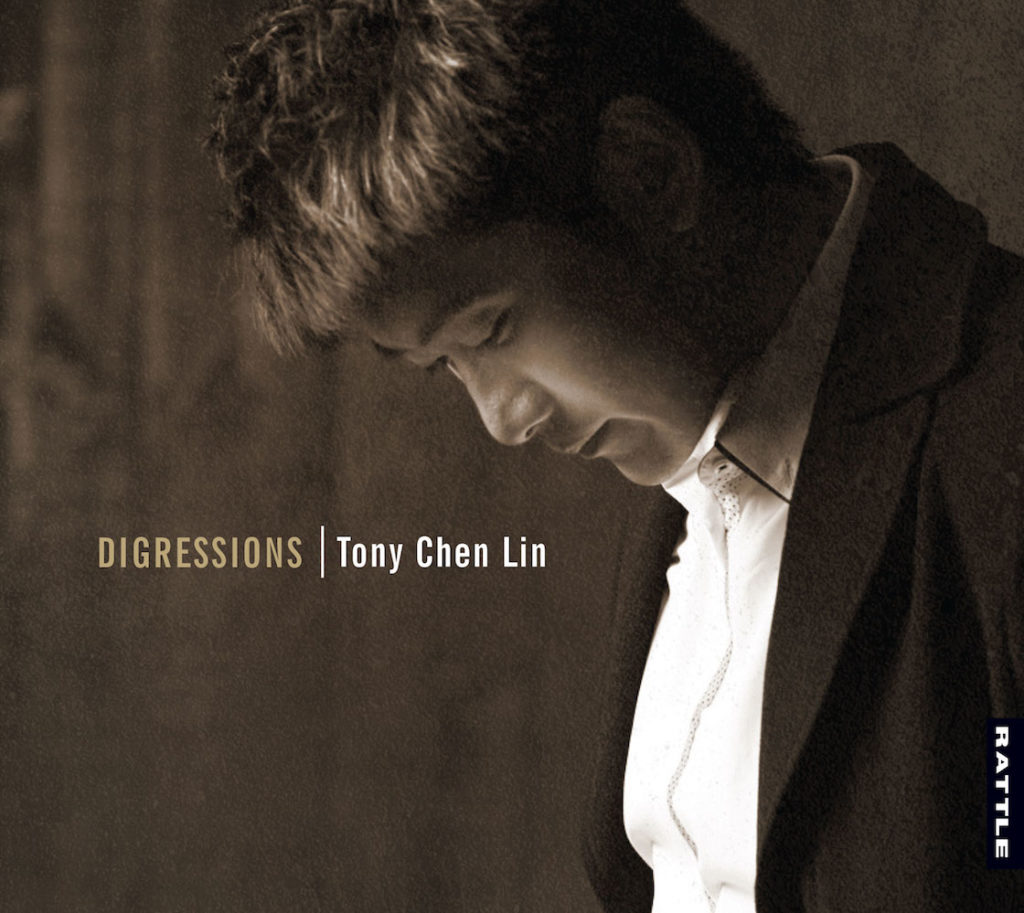 My first encounter with Tony Chen Lin was in 2008 at Kerikeri’s International Piano Competition, in which he was awarded what I’ve always regarded as a “too close to call” second place to his friend Jun Bouterey-Ishido. Since then I’ve heard each of them some years afterwards give separate recitals in Wellington; and while appreciating the unique excellence of each, I’m still unable to pronounce either of them the other’s superior. Most recently I heard Lin perform at St.Andrew’s, which was less than a couple of years ago, in September of 2016  (the review can be read at the following link – http://middle-c.org/2016/09/tony-chen-lin-piano-evocations-visions-and-premonitions-in-st-andrews/ ), and two of the items he presented on that occasion are now included on this, his first CD, appearing on the Rattle Records label.

The CD’s overall title “Digressions” is borrowed from one of these two pieces, in fact Lin’s own composition. As its subtitle Meditation on R.S. suggests, the piece is a kind of reflection on Robert Schumann’s Humoreske, the work that concludes this recording’s programme. The opening tones of Lin’s piece seemed conjured out of the air, with occasional “impulses of delight” enlivening the self-communing character of the whole, the lines becoming more and more declamatory and detailed to a point where the music seems to turn in on itself and exclaim “Now, what was that work I was going to play? – ah, yes!….” – and from the resonances, the opening notes of the Schumann sound, in haunting accord with the pianist’s musings.

Before this, however, the disc’s contents take us well-and-truly to “other realms” (as Schumann was fond of saying), in the form of music firstly by Bartok and then JS Bach, the latter’s French Suite No. 5 in D Major being the “other” work previously performed at the 2016 St.Andrew’s recital.  One might think that the Bach piece, with its supremely ordered sensibilities, would make an excellent “starter” to any concert – however, we’re instead galvanised in a completely different way at the outset by one of  Bartok’s pieces. In Lin’s hands, the composer’s 1926 Sonata makes an arresting beginning, with its hammered repeated notes and three-note ascending motif, the whole peppered with irregular phrases and brusque punctuations. Amongst these, Lin still manages to find moments of light and shade, as well as in places giving the rhythms a disconcertingly irregular (almost “dotted”) pulse, creating a somewhat precarious, even “slightly tipsy”, effect, and adding to the droll humour. A sudden headlong sprint and a whiplash glissando, and the movement brusquely takes its leave.

Like some Dr.Coppelius-like clock, tolling bell sounds usher in the second movement, the piano’s repeated chords augmented by an insistently anguished single right-hand note, Lin’s clean, steady playing allowing the grim austerity of the scenario its full effect. Though this “tolling bell” rhythm persists throughout, Bartok creates whole worlds of cumulative angst and desolation over the widest possible range of colour and dynamics – a particularly magical moment in Lin’s performance sounds at 4’01”, with the constant stepwise rhythm suddenly hushed, almost sinister, as the right hand’s spaced-out pinpricks of light flicker disconsolately through the gloom.

The “rondo with variations” third movement features a pentatonic melody given all kinds of different rustic-like treatment, with songs and dances, fiddles and flutes, in the midst of great merriment and energetic spirits. Lin evokes all of these strands of colour and timbre with seemingly indefatigable energy, by turns invigorating and startling our sensibilities with his playing’s strength, flexibility and incisiveness. Throughout he’s served by a recording which reproduces every contour, scintillation and whisper, making for listeners as much a properly visceral as a musical experience.

After this, the music of JS Bach evokes a somewhat different world, though, as with Bartok’s work, Bach’s forms often incorporated dance styles and rhythms familiar to his contemporaries. The French Suites, for example, contain examples of well-known forms such as Allemande, Courante, Sarabande and Gigue, along with other dances such as the Gavotte, the Minuet and the Bouree, both courtly and rustic in origin. To my ears, Tony Lin’s treatment of these pieces open them all up to sunlight and fresh air – the opening Allemande moves directly and assuredly along a trajectory whose modulations go with the terrain, registering both impulse and reflection along the journey, though without impeding the flow, Lin animating the repeats in what sound like entirely natural and spontaneous ways, compelling my attention with every bar. How joyously the Courante leaps forward from all constraints, its canon-like voicings in places between the hands bubbling with energy and humour – and , in response, how dignified and visionary seems the stately Sarabande, the pianist’s way with repeats illustrating Lin’s ability to create time and space within the realms of a steadily-moving pulse.

I loved how the music seemed to then pick up its skirts/coat-tails for the Gavotte, and trip insouciantly through its paces, the pianist’s lightness of touch never descending to any kind of  “pecking” or jabbing at the music. The engagingly garrulous Bouree acted as the perfect foil for the succeeding Loure, with its sedate, but teasingly-patterned 6/4 rhythms, so very flexibly voiced. And in conclusion, the Gigue danced its way through the soundscape, Lin making something wide-eyed and wondrous of the inversions of the theme in the dance’s second half – a performance which so warm-heartedly brought out the music’s life-enhancing character for one’s listening pleasure.

Once the brief though enraptured musings of Lin’s own “Digressions” had prepared the way, I was more than ready for Schumann’s Humoreske. The composer meant the title not as “humour” in the accepted sense of the word, but as a kind of portrayal of the contradictory and volatile nature of the human condition. Lin’s playing gives the opening a beautifully thought-borne quality, something seemingly to exist both “in the air” and within the realms of the listener’s imagination, at once elusive and all-encompassing in its poetic effect – the composer’s “rhapsodising” about his Clara, and his expressions of love for her here given poignant utterance, obviously somewhere between the “laughing and crying” confessed to by Schumann in a letter to his beloved. At the beginning, the way the melody seems to be “revealed” as if already mid-course is beautifully brought about by the pianist, as is the spontaneous leap-forward of the quicker material, the left hand’s accompanying figurations allowed some tripping, angular quality, imparting a character of their own in tandem with the right-hand’s melody, the effect boyish and engaging! After the extended dotted-rhythm section quixotically dances through fanciful modulations, Lin masterfully eases the music back through its journeyings, returning to the first of the quicker episodes, and then, magically, dissolving such energies into the opening, as if the song we heard at the outset had been meanwhile singing to itself while awaiting our return.

Further fancy awaits the listener in the inspirational, often volatile second movement, during which succeeding moods appearing to “cancel each other out” with breathtaking rapidity. Lin’s traversal of the music is remarkable for its chameleon-like aspect, its ability to “go with” whatever impulse the composer’s fancy follows, while constantly keeping in mind something of what Schumann called an Innere Stimme or “inner voice” (a quality he also referred to concerning his Op. 17 C-Major Fantasie). So while Lin rings all the composer’s seemingly random changes of momentum and mood, he keeps us close to the music’s spirit with an all-pervading concentration on some unspoken and indefinable, but palpable “centre” around which all the “humours” revolve.

By comparison, the third piece, Einfach und zart (Simple and delicate) seems straightforward enough, interpretatively, a poetic opening, with a contrasting Intermezzo – rapid semiquaver figurations, including right-hand octaves at one point so as to set the pianist’s pulses racing! Here, the notes tumbled over one another jovially, Lin’s playing giving the octave passages a kind of fierce joy in their unbridled energies, before returning to the simple lyricism of the beginning. The Innig
(Heartfelt) section is here delivered by the pianist with a born poet’s sensibility, and the energetic Sehr lebhaft which followed then works up a proper head of steam as to convince us of the music’s inevitable “shower of brilliance” summation in Lin’s hands, only to suddenly (and characteristically) transform into a portentous march!

All the listener can do is gape in astonishment and “go” with the strains of the music as it struts into yet another realm of expressive possibility, muttering to itself as it fades into the following Zum Beschluss, one of the composer’s beautiful “epilogue-like” valedictions, an extended amalgam of song and recitative, here, as with so much else along this journey of Lin’s, most eloquently expressed. It remains for a series of swirling chromatically step-wise descents to rudely awaken one’s imaginings from this final reverie for a “return to life”, leaving this listener with “What a journey, and what a guide!” kinds of reactions! – Tony Lin’s ever-spontaneous and boldly adventurous playing seems to me to have most assuredly penetrated the spirit of the composer’s most fanciful, yet deeply-felt outpourings. In all, it’s a disc well worth seeking out and hearing... Link