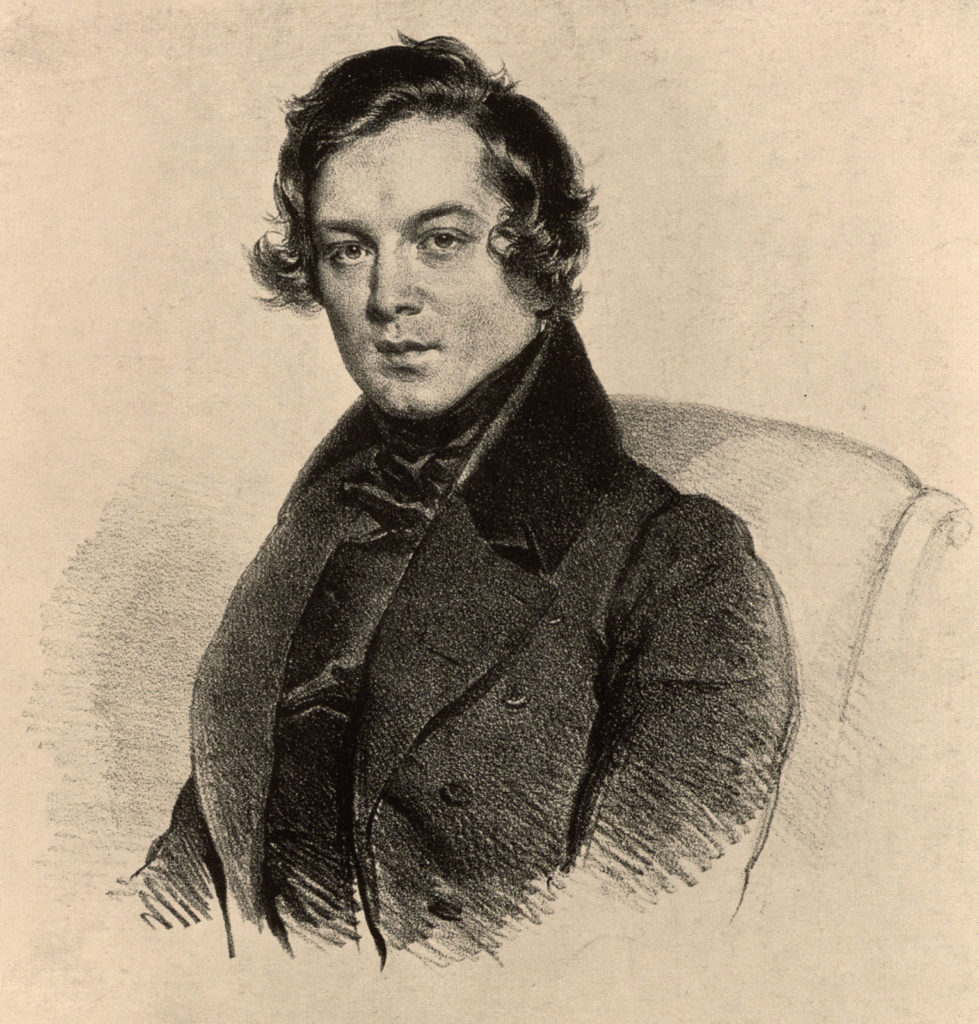 By 1836 Robert had deeply fallen in love with Clara, the daughter of his piano teacher, Friedrich Wieck. Her father bitterly opposed their marrying and had them living in enforced separation. Out of this period of anguish and despair during which he feared Clara was lost to him, a single-movement piano work entitled “Ruines. Fantasies” was born, one which he later described to Clara as “the most passionate thing I have ever written…a deep lament for you”.

Later in the year, Schumann was inspired to add two more movements to the work with the intention of publishing them together as a “Grand Sonata for Beethoven” to raise funds for a Beethoven monument in Bonn. The title subsequently went through many revisions; one favoured by the composer for a while was “Dichtungen” (“Poems”) with each of the three movements titled “Ruins – Triumphal Arch – Constellation”. It was finally published under the simpler but generic musical term “Fantasie” with a dedication to Franz Liszt (who returned the honour fifteen years later with his Sonata in B minor). Perhaps a more accurate title would have been “Fantasia quasi una sonata”, not only given its close association with Beethoven, but also if we were to consider its formal structure. It is indeed a sonata in disguise, a three-movement structure yet with an unorthodox sequence; Schumann places a rousing and typically virtuosic “closing” movement in the centre of the work. This masterpiece reveals Schumann at the core of his creative genius as the quintessential Romantic composer: a vitally original and radically innovative musician who embodied the duality of Classical traditions next to highly Romantic aspirations. Although the work acknowledges its traditional Sonata framework, it constantly pushes its boundaries, and more often than not succeeds at crossing them completely.

The first movement, “to be played fantastically and passionately throughout”, plunges into the opening theme, a fervent utterance of the composer’s “deep lament” for Clara. The turbulent accompanying figurations and trills almost boil with ardent passion. The movement is a joint venture between Schumann’s two creative alter egos, the tender and introvert Eusebius, and the passionate and extrovert Florestan. A nostalgic theme alluded to early in the movement presents itself plaintively in the central section marked “Im Legenden-Ton” (“in the style of a legend”) like an echo from a bygone age. This disruptive interlude is a typically Schumannesque device, a digressive move away from an established form. In an almost dream-like state occasionally interrupted by feverish visions, it exists in isolation from the surrounding “real” drama, like a fragmented “island” in the centre of the movement. The tempestuous opening theme ensues after an abrupt awakening.

It is characteristic of Schumann’s remarkable imagination to construct complex webs of symbolic references in his music that only few would recognize. A musical quotation that emerges in fragments throughout the movement is only fully unveiled to us in the closing bars. It comes from Beethoven’s song-cycle An die ferne Geliebte (To the Distant Beloved) with the words “Nimm sie hin, denn, diese Lieder” (“Accept, then, these songs that I sang to you, beloved”). Here, not only do we come to rest on the first satisfying resolution on the tonic chord of C major, but we also arrive at the source of all the tension that came before: Clara, his own “distant beloved”.

After the second movement – a heroic, Beethovenian march in Rondo-form led by Florestan (with a notoriously difficult coda) – Schumann quickly hushes applause-hungry audiences and again defies expectations with the astonishing Finale, a profound display of poésie in the form of a deeply private confession. This Eusebian movement is free and improvisatory and carries the emotional weight of the entire work, acting as the final conduit through which the composer pours out his tormented soul. Clara’s image can be perceived in its motifs and several melodic lines are cast in unison or imitation – are they imagined love duets? The many unpredictable harmonic shifts remind us of the desolate world of Schubert and hidden within are cryptic references to Beethoven’s Seventh Symphony. If the work had begun in impassioned turmoil, then it ends in conciliatory catharsis in Schumann’s most touching and poignant coda to date, in which it finally finds hope and peace in the last sustained C major chords – Clara’s key. With his usual penchant for literary allusions, Schumann prefaces the work with a quotation from a poem by Friedrich Schlegel: “Through all the tones in this colourful earthly dream, a quietly drawn-out tone sounds for the one who listens furtively”. This secret “tone” not only refers to the spirit of Beethoven that hovers above the work, but also to Clara. A few years later when they were finally reunited, Schumann directed Clara’s attention to this poetic inscription and asked, “Aren't you the ‘tone’ in the motto? I believe so.”